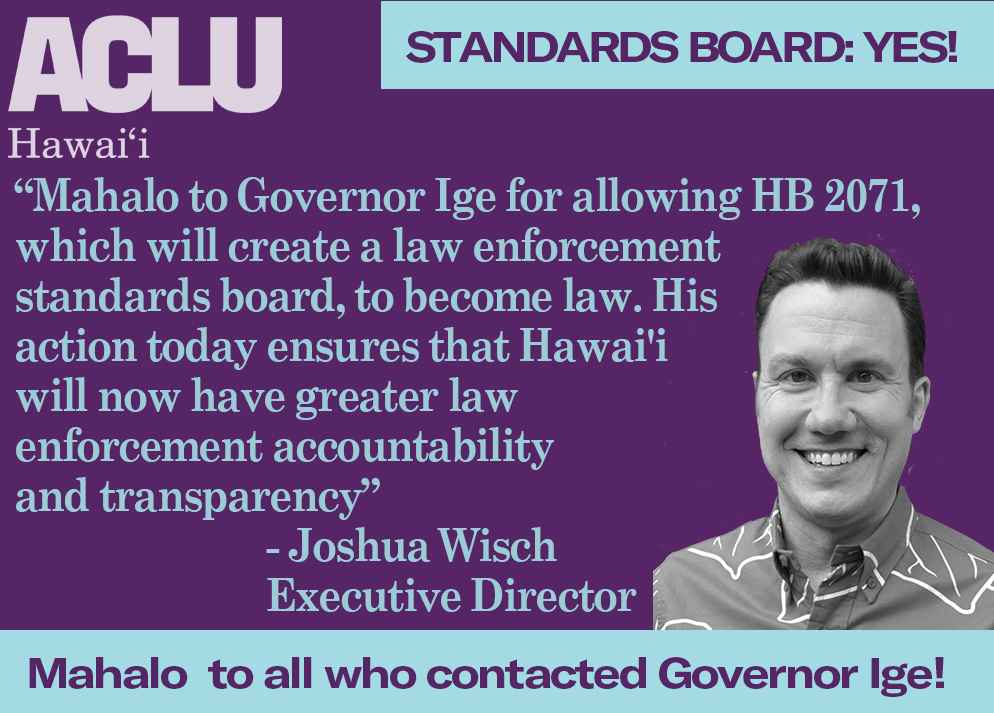 On Tuesday (July 10, 2018), Governor Ige might do the wrong thing for the wrong reasons.

He intends to veto House Bill 2071. This bill — if Governor Ige does not block it – would create a licensing board for law enforcement officers to ensure they meet and maintain minimum standards of training, education, physical and mental fitness, good conduct, and moral character.

It is about time. The movement to professionalize policing began in the 1950s in response to widespread police corruption scandals. Since then all states — except Hawaii — have adopted a local standards board.

Not having a law enforcement standards board means that from a legal perspective, it is easier to become a cop in Hawaii than to become a massage therapist or hair stylist. Both of these professions have state-sanctioned licensing boards — as do acupuncturists, pest control operators, private detectives, and at least 21 other professions — but not law enforcement officers.

So why does the person that fumigates your home need a state license, but the person who keeps you and your family safe, responds to your emergency calls, can arrest you, and potentially even shoot you, not need to be state certified? We cannot figure it out, and the Governor’s reasons for keeping it that way are simply wrong.

Governor Ige justified his veto threat on the theory that the Commission on Accreditation for Law Enforcement Agencies, also known as CALEA, already has professional standards that public safety agencies in Hawaii strive to achieve. But there are at least two critical functions that a local standards board performs that a national agency like CALEA does not.

First, a local board — unlike CALEA — directly certifies and decertifies individual officers based on whether they meet and maintain the necessary minimum standards set by the board with input from local communities.

But CALEA does not look at individual officers; it only considers the policies and training of the agency as a whole without looking at whether individual cops actually meet those standards. Certifying and decertifying police officers at the local level ensures we can trust that they are up to date with training and will know to protect our civil rights when they appear at our doorsteps or stop us by the roadside.

This is important. Every year, anywhere between 1,300 and 1,800 peace officers are decertified nationwide for failing to maintain minimum standards — but in Hawaii, that cannot happen because we are the only state that does not have a local standards board.

Second, CALEA has a set of accreditation standards that it requires agencies to meet — but unlike the benchmarks set by a local board — many of CALEA’s standards only require the existence of a written policy without regard to its content. For example, CALEA’s requirement that police departments have a written policy on car chases is satisfied whether a department has a dangerous policy that allows hot pursuit for any reason or a carefully drafted policy that prioritizes public safety.

Having a local standards board for the police should not be controversial. Police departments should be eager to show their officers already meet and exceed minimum standards.

And make no mistake, these departments will have a seat at the table. In fact, law enforcement — including all four police chiefs, two law enforcement officers, the Attorney General, and the Director of Public Safety — will hold eight of the fifteen seats at the law enforcement standards board.

There is simply no good reason to oppose having a more professional and better-trained police force. Only wrong reasons. Governor Ige’s main campaign slogan boasts “doing the right things for the right reasons.” On Tuesday he has a good opportunity to show us that he means it.